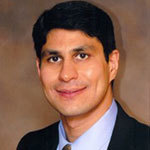 Education & Training: Dr. Sayeed, originally from Lincoln, Nebraska, went to undergraduate and graduate school at the Speed Scientific School of Engineering, at the University of Louisville, Louisville, Kentucky. He received a Bachelor of Science in Engineering Science degree, majoring in electrical engineering, and a Master of Engineering degree, with honors, specializing in electrical engineering. Dr. Sayeed was recognized by the electrical engineering department as the most outstanding graduate student. He was awarded the prestigious Samuel T. Fife award for academic excellence for his research in the field of microelectromechanical structures and systems (MEMS). He was the first person in the state of Kentucky to design MEMS devices. After he completed his Master of Engineering degree, he entered active duty military service in the U.S. Air Force. He served as an electronics intelligence officer from 1994-1997, at Offutt Air Force Base, Nebraska. He became interested in medicine and was awarded a health professions scholarship through the U.S. Air Force to attend medical school.Dr. Sayeed attended medical school at the University of Kentucky, Lexington, Kentucky from 1998-2002. During medical school, he was always drawn to the field of orthopedic surgery as the field required a firm understanding of engineering principles and biomechanics. Dr. Sayeed went on to graduate with high distinction and was awarded the prestigious Alpha Omega Alpha Good Physician Award. He then went on to the world renowned Mayo Clinic, Rochester, Minnesota, for his orthopedic surgery residency training from 2002-2007. After completion of his residency training, he was promoted to the rank of Major, in the U.S. Air Force, and served as staff orthopedic surgeon at Andrews Air Force Base, Maryland, from 2007-2008. Dr. Sayeed then became the Chief of the Orthopedic Surgery Department at Andrews Air Force Base, he was always interested in the sub-specialty field of adult reconstruction/total joint arthroplasty. He was subsequently sponsored by the U.S. Air Force to attend an adult reconstruction/total joint arthroplasty surgery fellowship from 2009-2010. Dr. Sayeed trained at the prestigious Rubin Institute for Advanced Orthopedics, at Sinai Hospital, Baltimore, MD, under the expert direction of Drs. Michael A. Mont, Ronald E. Delanois, and Harpal S. Khanuja. Upon completing his fellowship training in 2010, Dr. Sayeed then was transferred to San Antonio, TX, by the U.S. Air Force. He was promoted to the rank of Lieutenant Colonel and was the U.S. Air Force expert surgeon in the field of adult reconstruction/total joint arthroplasty.