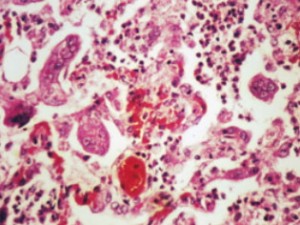 Over the past twenty years our nation has had it’s share of diseases and viruses flare up, but after a twelve-year drought with no deaths, one viral disease has finally put its name back on the map, measles.

In northwestern Washington, an unidentified woman died of pneumonia sometime during the spring, which is a common product of measles. After her autopsy, the results showed the presence of the measles virus. Although the virus’ existence was apparent in her autopsy, most of its common symptoms, such as a rash, were not present in her case. This made everyone around her, including herself, unaware of her disease.

The Washington State Health Department believes she most likely contracted the disease while being at a local Clallam County medical facility during a recent measles outbreak. The department stated, “She was there at the same time as a person who later developed a rash and was contagious for the measles.” They also went on to explain that the woman had an array of medical issues, some of which required medications that ultimately lowered her immune system making her much more susceptible to measles. What this tragedy has proven, if anything, is the importance of vaccinations, according to state officials.

With as many people vaccinated as possible, the spread of this disease can be contained and hopefully fully diminished someday in the future. Although it can be lethal, measles are looked at as a very treatable and preventable disease. “We think that one in 2,000… will die from it even with great medical care. We are very sad about this because we think in general of measles as a preventable disease,” explained Dr. Anne Schuchat, director of the respiratory disease branch at the Centers for Disease Control and Prevention. She then went on to further explain that only 1 out of every 4 measles victims ends up being hospitalized.

One thing that makes the measles virus so dangerous is its ability to easily pass on from one host to another through breathing, coughing and sneezing. Even without the measles’ clear symptoms, such as a rash, the disease is still highly contagious. So it is no wonder why an individual with measles should always avoid social contact or crowded areas. You can succumb to the measles virus just by walking into a room that a measles victim has been in within the past few hours. If someone has a weakened immune system they normally are not eligible for the measles vaccine in the fear that they could contract the disease themselves.

This unfortunate woman suffered a death that has not occurred in the U.S. since 2003, which should make everyone more aware of that fact that measles never left, and that proper precautions should still be taken to elude its spread.